The most beautiful girls from more than 50 countries, including Montenegro competed in the final of the The Miss Globe 2019 in the southernmost city of Montenegro, Ulcinj. Montenegrin contestant Martina Božinović  won the Miss Tourism Globe in this year’s competition.

The Miss Globe is an Annual International Beauty Pageant run and produced by Deliart Association & owned by the Canadian based The Miss Globe Beauty Pageant. It is a competition that has traditionally focused on judging and ranking the physical attributes of the contestants, as well as the women’s personality traits, intelligence, talent, and a contestant’s ability to answer judges’ questions on various subjects as judged criteria.

Gorgeous and talented Martina Božinović from Montenegro overwhelmingly shared her experience and said: “I had a kind of responsibility for the role of the host. For this reason, it was easier for me last year at the Miss Tourism World competition in China”, stating that at this competition she wasn’t focused on winning, as much as to represent Montenegro in the best possible way. 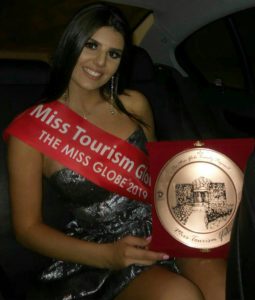 Talking about her upcoming projects, Martina said: “After being successful on many similar competitions, I had many offers to be a part of different TV forms, brands and advertisements, but you will find out about that soon“, Martina said with a smile.

“After this successful competition, my expectations are really big”, Martina concluded.